After a decade of absence, there is a Kabang sailing the North Andaman Coast again. Moving with the wind and waves, we embrace the past to look ahead. Trusting the same ancient knowledge that has guarded the Moken sea nomads for many centuries, we are sailing on the last Kabang houseboat to continue the legacy. The knowledge of the Moken has been passed down in stories and skills from generation to generation. My husband Hook belongs to the last generation that was touched by the old way of life of roaming the Andaman Sea. Although only a childhood memory, the nomadic spirit of freedom, selflessness and connection to the natural world continues to live in him. Born into a time of transition for his people, he moves with the same ease through the mainland traffic as he does through the storming sea. It is the connection to the modern world that brought us together. And the connection to the Moken world that brought us to live on the Kabang. 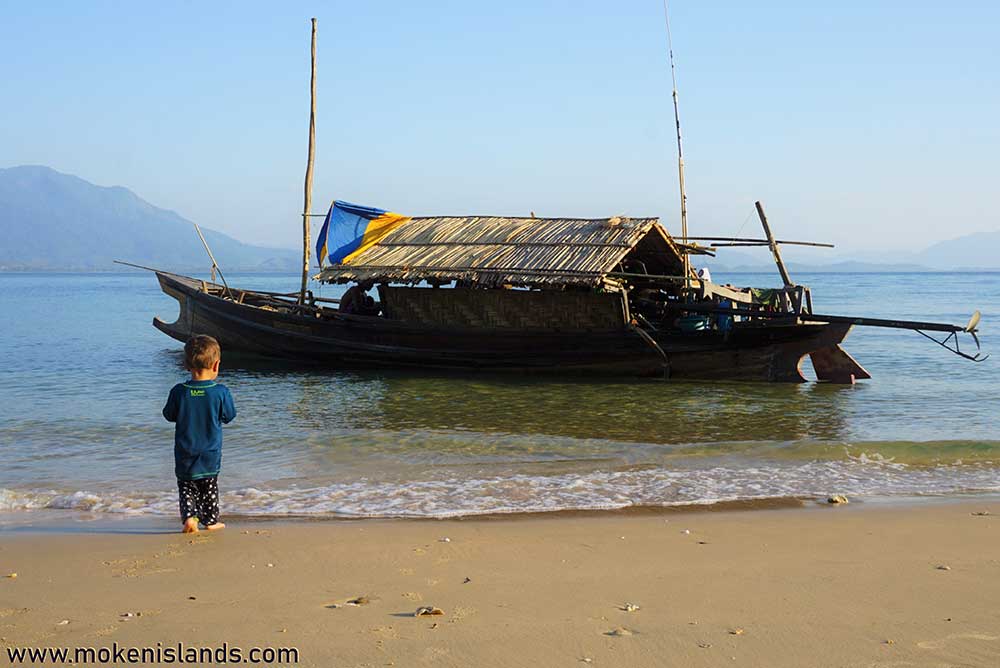 When I got to know Hook’s culture a great compassion grew in me. I look upon the Moken culture with a sense of longing, feeling that this connection as a culture to the environment must have lived in every culture at one point and hence also in Germany where I am from. As our relationship developed, I invited Hook to visit my home, where a year ago our son was born. It is now my turn to engage with my husband’s culture in a way that I hadn’t imagined possible. Our wooden houseboat is 11m long and 2.5m wide, and while it feels like the perfect size for a three person family, it is in fact the smallest place I have lived in. But if we add the ocean as the backyard and the ever-changing islands where we drop anchor each night, then it is the biggest place I have ever lived in.

Looking at the natural state of the world we are confronted with pollution, climate change and a resulting increase in natural catastrophes. On a social level there is the disappearance of many small cultures, dismantled aggressively through humiliation and discrimination. The assimilation of cultures through technological development erases the many different ways of relating to the natural world. The modern way forward seems to thrive in cultural one-ness and a complete detachment from nature. Many cultures have lost their relation to the natural world long ago and with that the knowledge to coexist as diverse human societies in nature. The only way forward seems to relearn that connection that in many cultures has been lost many generations ago. Fortunately there are still cultures around, hovering at the edges of the major societies, that haven’t lost their connection to their natural environment. One of them are the Moken, who used to craft beautiful boats with simple tools to live in and from the ocean. This way of life started to change around 30-40 years ago until about ten years ago, when the last nomadic family left their boat and moved into a house. Our Kabang is now the only one roaming the seas. 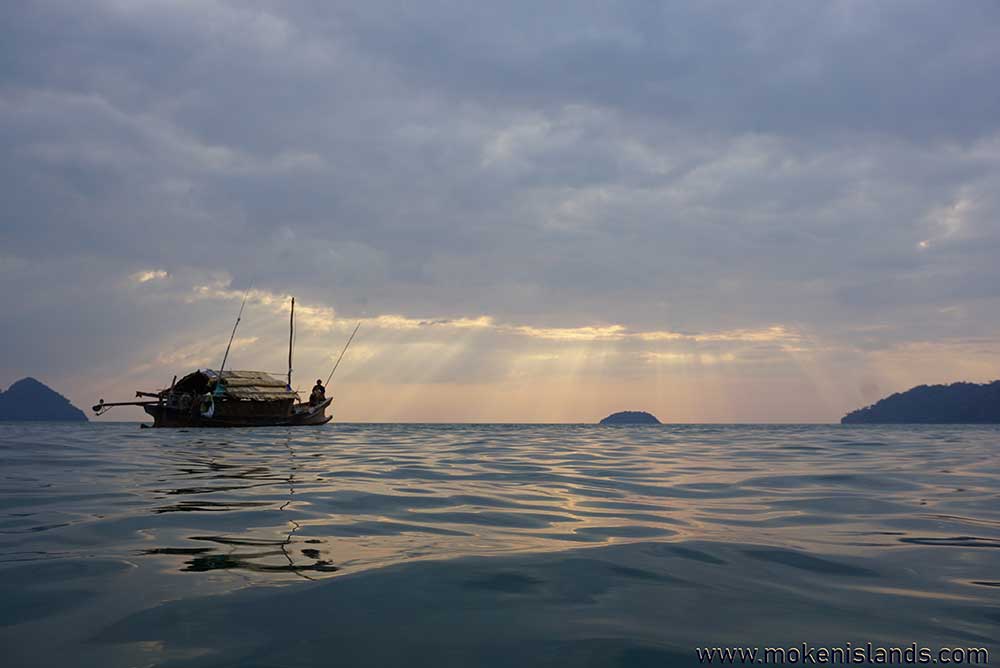 Hook spent his early childhood on a traditional Moken houseboat. His family was among the last to abandon this nomadic lifestyle as modern changes reached the Moken: Borders tightened between Thailand and Myanmar leaving the stateless Moken in fear of harassment. Land was no longer cultivated by those who cared for it, but was suddenly owned by investors. Dense forests were either cut down or put under national protection. It was no longer possible for the Moken to use the land and resources that lay along their nomadic route. Without access to the large hardwood trees required to build a Kabang, very few boats have been built from scratch since the 1990s. With a lifespan of 10-15 years, the few remaining Kabang suffered the Tsunami in 2004. With the assistance of the Moken Pilot Project and Professor Narumon of Chulalongkorn University, two Kabang were built after the Tsunami in the traditional method with a single tree as the hull, but they are no longer seaworthy. In 2014, Project Moken made a feature documentary about Hook entitled: “No Word for Worry”, and raised funds to build another Kabang. Unfortunately it was impossible to cut down a large tree to serve as the hull, so with the help of Norwegian insights into Viking boat building, they drafted a model built with planks. This Kabang was finished in 2017 and given to Hook to continue the legacy. 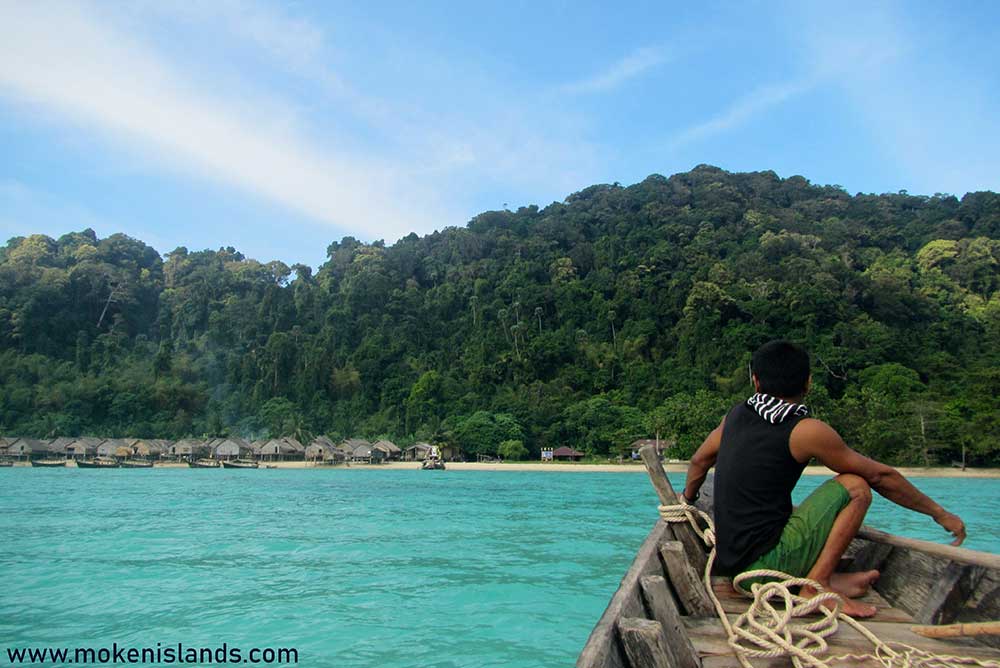 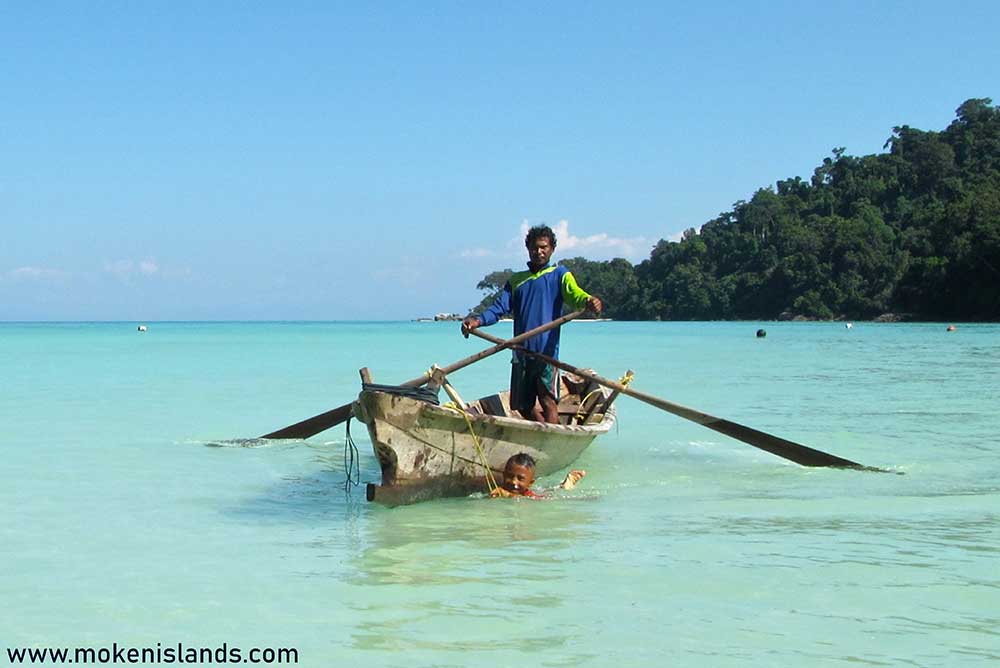 Living in nature, there was no trash in the old days. Nowadays with the overflow of plastic in the ocean, trash is washed ashore on a daily basis and cheap processed food has become part of the Moken diet. The global trash problem has become a personal problem for the Moken as well. We hope that part of our journey will find ways to address the plastic problem in the ocean and find creative ways of diminishing it. To me, the Moken culture embodies peace – cooperative coexistence with oneself and others in nature. There are two cultures in the same boat now entering the conversation about what will be passed on to the next generation: our son. It is a very personal journey of our family, but maybe more than us three will benefit from this conversation between tradition and modernity. What is worth preserving, what shall be destroyed? What inspires us to thrive as human beings in harmonious coexistence with our natural world?

To support our cause have a look under: Take Action here. Follow us on Facebook or drop in and visit us on the website from time to time to read updates on our journey. 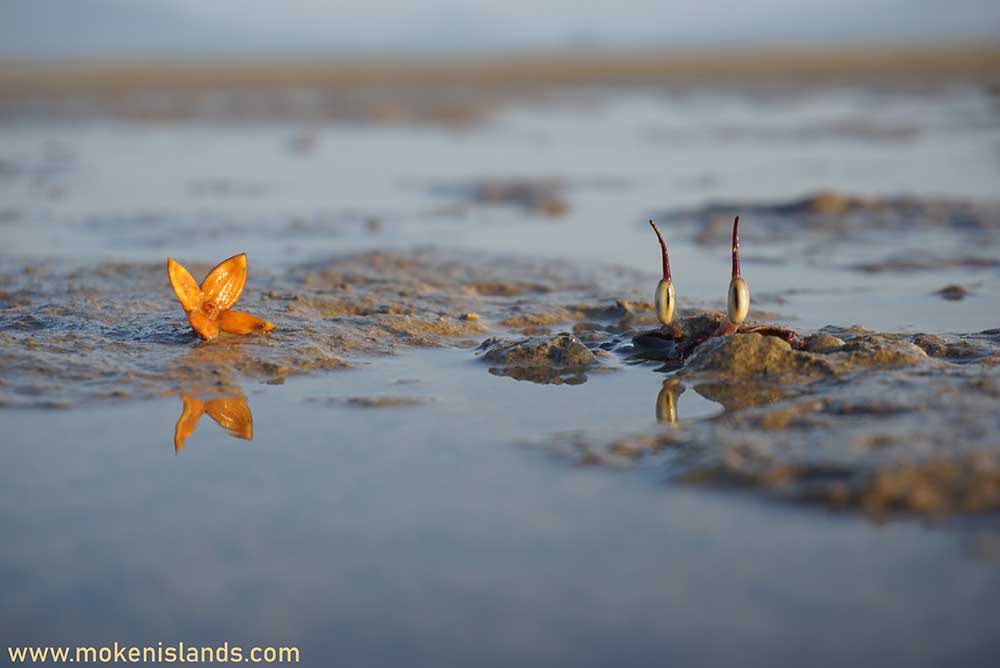