The Surin Islands are located in the Andaman Sea, 60 kilometers from the Thai mainland.
Diving and snorkeling are very popular here – whales and whale sharks are known to frequent the area, and the islands are a nesting site for three species of turtle.

Common ports of departure are Kuraburi and Khao Lak in Phang Nga province.
Accommodation can be found at the national park, either by renting tents or staying in park-run bungalows.
The islands abound with uninhabited pristine white-sand beaches that invite you to picnic, relax, get a tan, and even learn Moken mythology. Fill your day with amazing snorkeling right off the beach. Head out on a long tail boat to the hidden beaches of Mankorn and Stok islands, or explore the dramatic cliffs and windswept ridges of the south side.

The colourful marine life never ceases to amaze snorkelers. The reefs around the island are shallow enough to explore the underwater life without scuba-diving equipment. The Moken guides know where to look for clownfish, sea turtles, sharks, barracudas, diverse soft and hard corals, lobsters, sea cucumbers, and many other underwater species.

Surin is mainly composed of granite rock, covered with rich forests. The reefs surrounding the islands count over 128 species of corals, 205 species of fish and 118 species of other marine organisms. In 2010, the shallow-water reefs experienced extensive coral bleaching due to a prolonged increase in sea temperature. The corals seem to be recovering quickly, and fish species are still abundant.

Beyond the reefs, the diverse ecosystems of Koh Surin include mangrove canals, tropical forest, evergreen forest, beach forest, and sea grass beds. Over 80 species of animals have been recorded, including mouse deer, monitor lizards, pythons, the rare Nicobar pigeon, lemurs, and flying foxes. Edible plant species found on the island include bamboo shoots and ground potatoes.

Read more about the local inhabitants of Surin Islands and Travel Info. Find pictures of the area in our Gallery. 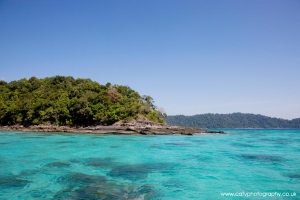